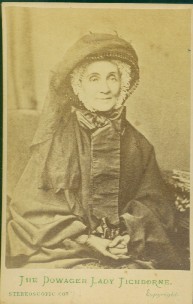 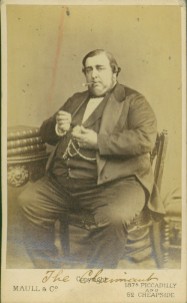 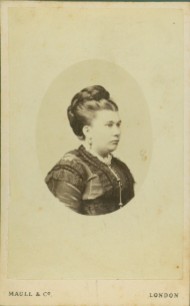 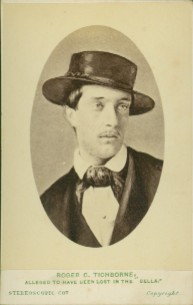 It was possible to purchase small plaster figurines of the major protagonists in the case as well as their cartes de visite (photographs) which meant that their features were well known to the public.

The Carte de Visite style of photography was patented by a Parisian photographer, Andre Adolphe Disderi, in 1854.  Similar to the calling cards so favoured in the social etiquette of the Victorians, these 'visiting cards' were Albumen prints which were small, light and easy to collect. The standard Carte de Visite measured 2 ½" x 4" and by the 1860s the craze for them had become immense in Great Britain.  Their popularity led to the photography and publication of cards depicting prominent personages.  Card mania spread throughout Europe and quickly to America.  Albums for the collection and display of cards became a common feature in the fashionable Victorian parlour.  Queen Victoria herself is known to have compiled more than 100 albums of Cartes de Visite, featuring royalty and others of social prominence.

In England, sales of these cards ran into the hundreds of millions annually.  The Carte de Visite was a commercial success for a number of reasons: they were cheap (the average price for a card was a shilling - 5 pence, and mass produced ones could be bought for 25 pence a dozen; they were easy to collect (being stored in albums) and collections became highly treasured (not least of all for their entertainment value in this pre-TV age).

Several photographers are known to have photographed identities associated with the Tichborne Trials.  These included:

Maull & Co., London - one of the first commercial photographic studios in the UK

From 1871 it became clear that there was a market for Tichborne souvenirs.  The Cartes de Visite produced during the Tichborne Trials are yet another example of the dearth and variety of affordable souvenirs being produced for an eager public.  Identities commonly depicted included the young Sir Roger Tichborne (from a photograph taken in Chile), Mary Ann Bryant (Mrs Tom Castro), the Gentlemen of the Jury, Sir Alexander Cockburn (the Lord Chief Justice of England), Henry Hawkins (1st Baron Brampton), the Dowager Lady Tichborne and Tom Castro, the Claimant himself.  In addition to their historical significance, by association with these infamous Trials, such Cartes de Visite are also a valuable snapshot of the era - capturing the style, ability and quality of the camerawork of the photographers and studios producing them.  This style of photograph was literally a tradesman's card.  With their often ornately decorated and illustrated backs, they remain as a testament to the commercial photographers operating in Great Britain during the late Victorian period.

Individual Cartes de Visite relating to the Tichborne Trials of 1871-74 are becoming increasingly scarce.  In a regional context, they are significant ephemera which, like many pieces of Tichbornalia provide an intangible link between Wagga Wagga and the other side of the world.  The Trials may have taken place in London, but essentially, this remarkable story had its birth locally, when butcher Tom Castro first revealed his 'true' identity.

Researched and written by Michelle Maddison, Curator - Museum of the Riverina