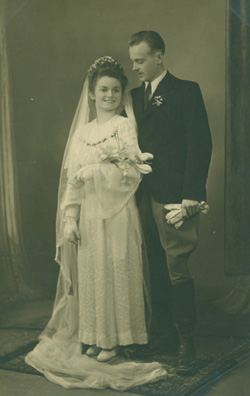 Thomas Taszilo Tajber von Tieber Tiemendorf was born in Budapest, Hungary on 22 July 1919.  Shortly following World War II, Thomas and his new wife, Anitha Irene Keresztesy-Kuruc (born Vienna, Austria, 22 December 1927) decided to migrate to Australia.  The Tajbers sailed from Naples, Italy on the Swedish passenger carrier Skaugum, disembarking in Melbourne on 27 March 1950.  Thomas recalls 'migrants were packed in like cattle, in big rooms [with] wooden bunks, 30 people in one room, not much privacy, we just took it as it came, we had no choice.'  [Interview conducted with Thomas Tajber, Wagga Wagga, 2007] 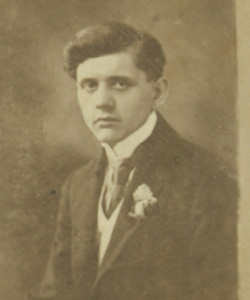 The table piano (or tafel klavier) was made in Munich, Germany, by the firm of J. Mayer.  A serial number stamped on the interior frame dates its construction to 1830-40.  The piano originally belonged to Thomas' father, who as a young man, was a concert pianist in Hungary, and afterwards became a music teacher.  Thomas was only a baby when the piano was being used, and later, the piano came to be regarded by the family as just another piece of furniture.

Due to the large number of passengers carried by migrant ships like the Skaugum, each person sailing was limited to the amount of luggage they could carry.  They were often only able to take what necessities (and small mementoes) they needed in order to start their new lives.  If someone wanted to take excess baggage (including furniture) an application had to be made with the occupational authority, in this case, the US forces in Berlin.  Luckily, the Tajbers were granted permission to keep their piano.  The legs were removed, and it was placed into a custom made wooden crate, packed with blankets.  The piano began its journey two weeks before Thomas and Anitha left Bavaria.  The piano was sent to Naples by train, whilst its owners themselves passed through three transit camps within Italy.  They did not see the piano again until they were on board the Skaugum, and this was purely by chance: 'we were near the Equator, and all the hatches were opened to air the holds.  We looked down into the hold and saw our crate.  There were different grades of people on board the ship, and some would tip their unwanted drinks down the hatch, which then landed straight on top of the piano crate!  Luckily, nothing penetrated, but I worried about the piano, as four weeks is a long time at sea, and a lot of drinks later!'  [Ibid.] 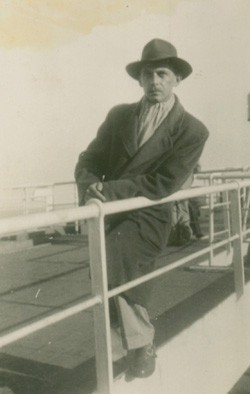 After landing in Melbourne, Thomas and his wife immediately travelled by train to the migrant camp at Bonegilla.  One day the piano just turned up at the camp.  During his first two years in Australia, Thomas was under contract to the Australian government to pay back his fare, and had to take whatever work he was allocated.  He was sent to country Victoria, where he wielded an axe for the first time, felling trees for the Electricity Commission.

When the debt was repaid, Thomas and Anitha eventually bought a farm approximately 80 km from Melbourne.  This became their home for the next 17 years.  They then moved to Bega, where they purchased a dairy farm.  In 1990, after spending 23 years in Bega, the Tajbers decided to retire.  They looked at about 5 dozen places throughout NSW and Queensland, prior to deciding to make Wagga Wagga home, which they did for the next 17 years.  Thomas and Anitha, and their children Beatrix Yvonne and Adrian Thomas all became part of the Wagga community during the years they spent here.  They are representative of the post World War II European migrants who chose to make their home in Wagga Wagga. 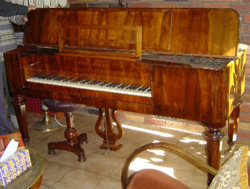 After starting life in Munich, the piano moved with the family - travelling to Bavaria, through Italy, to Bonegilla, Bega, and finally ending its days in Wagga Wagga.  The piano is significant as an unusually large and cumbersome non-essential possession that was allowed to be brought out on a migrant ship following World War II.  When Anitha Tajber died, it was her wish that this treasured possession remain in her adopted home of Wagga Wagga.  Anitha wanted others to enjoy the piano that afforded her so much joy in her new homeland, whilst surely reminding her and her husband of the family and country they had left behind.

Researched and written by Michelle Maddison - Curator, Museum of the Riverina 2007