The Greatest Impostor in History:

Souvenir figurines of the Tichborne Trials

The most stupendous of legal proceedings date from the day in history when a stout, uncouth man emerged from his hut in Wagga Wagga and announced he was the long-lost Sir Roger Tichborne, heir to a fortune in Hampshire, England, England.  The Tichborne Claimant, as he became known, set in motion a drama, on which over a century later, the dust has not finally settled.  The identity of the Tichborne Claimant became a cause celebre around the English speaking world, leading to two court trials - one civil, one for perjury.  The trial lasted 291 days, involved 36,000 cross-examination questions and defence council speeches that lasted months.  Even sending of special commissions to Australia and Chile failed to prove to everyone's satisfaction whether the Tichborne Claimant was a butcher from Wapping, London. 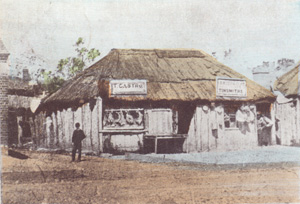 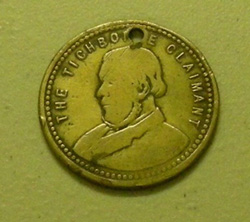 Souvenirs - including figurines, glassware, pamphlets and the infamous Tichborne bonds - were mass manufactured for the duration of the trial.  Souvenir figurines of the trial were made for the well off and working class alike.  Cheap figurines were manufactured using materials ranging from painted and unpainted plaster, earthenware and terracotta. For the wealthier collector, china and porcelain statues were created.  A Staffordshire figurine of Orton is reputedly kept at the Prime Minister's residence, Kirribilli House.

In 1984, Mrs Elaine Mussared (nee Gibbes) donated a set of four figurines - a treasured family memento - to Wagga Wagga City Council, on behalf of her father, Alister Gibbes. Mr Gibbes was the grandson of William Gibbes, a practicing lawyer, and Wagga-based attorney of Thomas Castro, the Tichborne Claimant.  Mrs Mussared explained that it had always been the understanding of her father's family that the figurines were manufactured and sold in London at the time of the Trial to help defray the legal costs of the defendant.  These figurines were originally sold in a set of six.  The personalities depicted in the original set comprised the Solicitor General, Sir Roger C. Tichborne before he left England (as a young man), the Dowager Lady Tichborne, the Claimant (Orton), the Magistrate and the Sergeant.  The figures in this group are purported to have been manufactured in France, using coloured plaster. 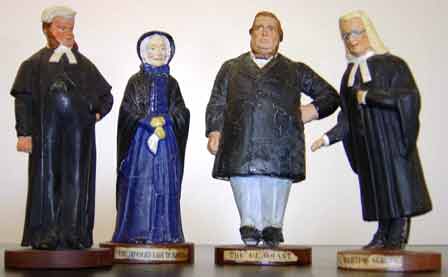 Brighton Museum (England) has a complete set of six figurines, as part of the Henry Willett Pottery and Porcelain Collection.  The catalogue of Willett's collection says that the figurines of this group (pictured above) were made in France of coloured plaster.

Henry Willett was the founding father of Brighton Museum.  His pottery collection is now known under the title "Mr. Willett's Popular Pottery".  His most innovative collection was that of pottery and porcelain illustrating British popular history.  Henry Willett collected ceramics in order to tell the story British people, being convinced that ceramic figures and vessels could tell stories through the images with which they were decorated.  There are some 2000 pieces in his collection, most of them dating from 1600 - 1900.  He catalogued them under 23 themes, which cover all aspects of British history; royal and political, military and economic, social and cultural.

The Fitzwilliam Museum at Cambridge (England) has two earthenware figurines of the Claimant Arthur Orton in its ceramic collection.  The two figures, one plain white and the other partly coloured, show Orton in top hat and frockcoat holding a gun, with a bird perched on his left hand.  These figures, which are on an oval plinth with the name "Sir R. Tichborne" in relief on the front, stand about 14¾ inches in height.  The figures came to the museum as part of a bequest from Dr. Glaisher of Trinity College College, Cambridge.  Dr. Glaisher died aged 80 and would have been 26 at the time of the trial.

The Director of the Ceramic Department said that Dr. Glaisher was a methodical man and made notes about his pieces.  Dr. Glaisher wrote of the two Tichborne figurines: "The statuette is really a portrait and quite recalls the man."  And further "The Tichborne Trials (1871-74) occupied so large a space in the life of the nation in those years (which it would be difficult for anyone who did not live through that period to realise) that I wanted to obtain some pottery record of the event."  In his notes, Dr. Glaisher says that Orton made a confession, which appeared in the "People" newspaper in 1895.  In this, Orton says he was good at pigeon shooting - which accounts for the gun and pigeon on these earthenware figures.

A famous children's author named Randolph Caldecott modelled another contemporary group of figurines which were sold as souvenirs.  Using terracotta, all personalities (six in total) were depicted with the heads of animals. The three judges: Lord Chief Justice Cockburn, Justice Mellor and Justice Lush are owls, the Claimant is a turtle and Mr Hawkins and Dr. Keneally as a hawk and cock respectively.  Brighton Museum Museum has a full set of these figurines.

Randolph Caldecott (1846 - 1886) transformed the world of children's books in the Victorian era.  Randolph's output, however, ranged wider than this.  He illustrated novels and accounts of foreign travel; he made humorous drawings depicting hunting and fashionable life; he drew cartoons, and he made sketches of the famous inside Parliament and out of it; he also exhibited in oil and watercolour in London's Royal Academy and galleries.

The Tichborne figurines are highly representative of the fascination that this case created throughout the English speaking world.  They are a physical embodiment of the enthralled excitement and interest which was generated amongst the public at large - an interest which is still being generated today.

The Claimant endured years of trial, ten years of penal servitude after, and twelve years of miserable obscurity.  He died on All Fool's Day, 1898, and was buried in an unmarked grave at Paddington Cemetery (London) with the name Sir Roger Doughty Tichborne defiantly engraved on his coffin.

The question remains, could any imposter have had such stamina?

Researched and written by Michelle Maddison, Curator, Museum of the Riverina, Wagga Wagga

Robyn Annear    The Man Who Lost Himself: The Unbelievable Story of the Tichborne Claimant, Melbourne: Text Publishing, 2002