"Not bad for a boilermaker from Bendigo and his cohort the ice vendor from Moonee Ponds."    [Peter McEncroe, son of Francis McEncroe]

Wagga was the birthplace of the Chiko Roll.

From the 1930s-50s, Francis and his brothers had been running a large silver service catering venture, travelling around country shows with their team of about thirty hometown staff.  Francis was renowned for his ingenuity, and was always on the look out for new and distinctive ideas to stay abreast of his competitors.

One day Frank decided that there was a need for a hot snack that could be eaten with one hand at a race meeting, country shows, football matches and the like.  Watching a man selling chicken rolls outside a football ground set him thinking.

He made his first rolls on a small hand-fed sausage machine.  They were a concoction of boned mutton, celery, cabbage, barley, rice, carrots and spices.  This combination was then wrapped in a thick egg and flour dough, then fried.  Both ends were hand- painted.

Frank's answer to the chicken roll may not have contained any actual chicken, but the appeal was enormous.  After much planning and experimentation, the resulting product - the "Chicken Roll" - was sold commercially for the first time at the Wagga Wagga Agricultural Show in 1951.  The "Chiko" as it became known was an immediate success and the quantity made for the show was sold by mid-afternoon of the second day.  The public had given their approval to the new take-away food.

Hugely successful in its own right, the Chiko would most likely have remained a regional Victorian curiosity if not for a fortuitous meeting with some other visionaries, and the money Frank's wife Annie had saved up during the war.

McEncroe used this money to buy a small factory in Coburg, Victoria.  By chance, it happened to be located near the Floyd Family Iceworks.  The Floyds encouraged Frank to freeze his products for distribution and together they formed Frozen Food Industries to market Chikos and other fast foods.

By 1956 every milk bar and fish and chip shop in the land could pull a Chiko out of the fridge, pop it in the fryer, squirt it with sauce and slide it into its own little bag.

To celebrate the 50th Anniversary of the Chiko Roll, the current manufacturer, Simplot, presented the cities of Bendigo and Wagga with gold plated Chiko Roll replicas. 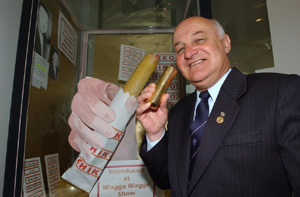