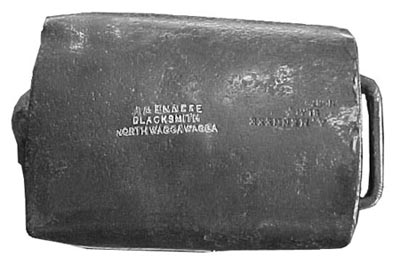 German migrants from South Australia and Victoria were attracted to the Riverina's free selection policies in the mid-19th century. Did you know in 1858 the town of Holbrook was locally known as the Germans and officially changed to Germantown in 1876?

The study is designed to support the Museum's work in documenting local heritage collections associated with people of German backgrounds.

Stage One includes an illustrated short history of German migration and settlement in the Riverina from the 1850s to the present - the development of local commerce, agriculture and wool industries and the local impact of internment and post-Second World War settlement through Uranquinty migrant hostel. It will be managed by the Museum with advice and assistance from the Migration Heritage Centre.

August Menneke was born in 1838 in Bakenem, Germany and arrived in NSW around 1858. One of the hundreds of German migrants who made the Riverina home in the 19th century, he established his own blacksmith business in North Wagga immediately after his apprenticeship.

By the 1870s Menneke had won fame, particularly for the goods he manufactured for bullock drivers. He had a perfect ear for the sound of a bell. They were used on a leader in a bullock team or on other stock so they could be easily located.

According to legend, a test was carried out on top of Mount Kosciusko to find the best bell maker in Australia. Menneke won when his bell could be heard ten miles away.

August Menneke died in Wagga in 1904 and is remembered as a legendary bell-maker and fine blacksmith.

In the 1940s, Dame Mary Gilmore immortalised Menneke in Australian folklore through her poem Bells and Bullocks:

'Mennicke's bells?' Then he'll sayNever heard none like 'emMennicke, he had the way
No one else could strike 'em